Each week throughout the summer we will focus on an artist in this new series.  Enjoy getting to know our wonderful artists and what inspires them to create! 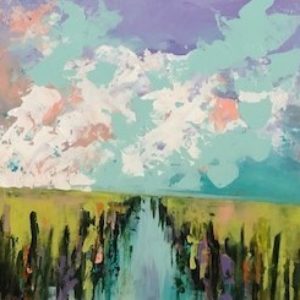 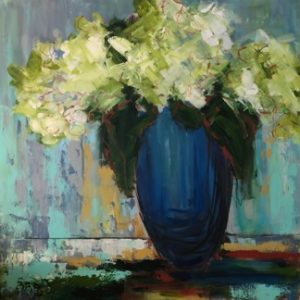 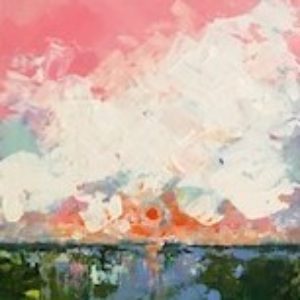 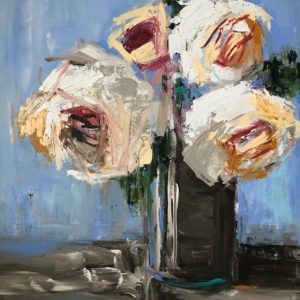 What artist inspires you work? Ann Watcher. I love her play with texture and color. Everything she does is worthy of going on a wall to me. When I did a show with her a few years back, I was so excited to be featured with her. She also sells at Artsource of course, but when I first saw her work, I just thought it was beautiful. So she is the one that makes me want to push my boundaries…especially her work with a palette knife which I am know learning to play with more. I think shes got it down pat.

What is your favorite Raleigh Landmark? I love the State Capital. Its outside my window at the Lawfirm. When I first came to Raleigh as a young kiddo from Columbus County I thought it was a magnificent building. Now I work in the same block and I’m still in awe of what it stands for and its beauty.

What is your favorite piece of art that you own?  A piece of pottery from Charleston that is actually pretty hideous but its fabulous in my eyes….a lovely clay bowl with a pig hanging off the side of it..its a serving piece that I actually have people asking me to leave it in my will to them if I leave this earth before them. Not pretty! But unique.

How do you determine your color choices? My choices are determined by my love of blue…even if the object should not have any blue hue, I will find a way to use blue!

How did you get started painting? I was dining in Café Luna one evening and fell in love with Nicoles artwork. Her artwork inspired me to want to learn to paint. I then found Cathy Martin, began taking lessons from her and both of those women, Nicole White and Cathy Martin, and their art, inspired me to want to use color  and great brushstrokes to achieve a painting. That’s how simple it was for me to begin…They were my inspirations. And I just started…

Scott is a former Investigator with the  District Attorney’s Office where she was employed for twenty years. She worked almost exclusively in homicide cases, but sometimes took cases that needed special attention such as child sexual abuse or assaults.  Scott worked these cases from the investigative stage all the way through trial preparation and courtroom trials.  She has a very good reputation among the legal community and was named “Tarheel of the Week” in August 2004 for her work in the District Attorney’s Office.  Scott teaches trial preparation at the statewide Conferences of District Attorneys.

She loves her job, but the stress of this daytime job is actually what led her to painting.  Scott finds painting to be therapeutic to her everyday life in the crime scene world.  She says jokingly, “In lieu of therapy, I found an art teacher.  In lieu of Prozac, I picked up paints.  After a day in court, and viewing crime scene photos, creating bright canvases of teal, periwinkle blue, and hot pink seem to be a wonderful counterbalance that keeps me grounded.”

Scott work has been widely collected within the Southeast.  She paints with acrylics, and enjoys creating still-life and beach scenes. 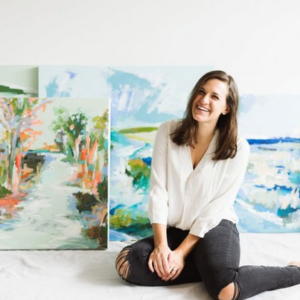 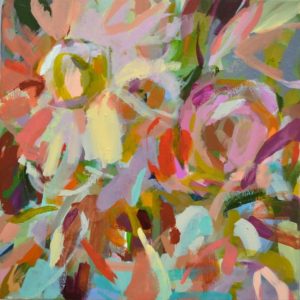 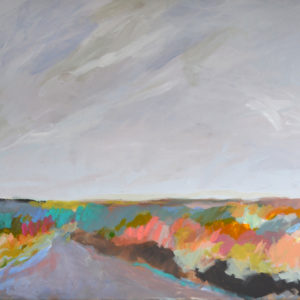 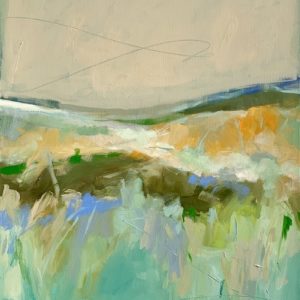 How do you determine your color palettes?

I get color palette inspiration from all over — a magazine spread, the way light reflects off a surface, even the music I listen to while painting sometimes affects my color choices. Many times, I’ve just been excited to use a new paint color and allowed a palette to evolve from that one color.

What is your favorite item in your home?

Other than family photos and the art I’ve personally collected, I’d have to go with my guitar. I used to write music and have been in a couple of bands, so it reminds me of some really fun and sentimental times. It also gives me another creative outlet when I get the chance to play every now and then.

What type or art would you suggest mixing in with your own?

What is your favorite restaurant in Raleigh?

My husband and I used to live in Five Points and we walked to NoFo all the time for dinner and for brunch on the weekends — the wait staff basically knows our cocktail order as soon as we walk in the door. I love it for the quirky atmosphere, the good food and the memories made there.

Top tip for hunting for the perfect piece?

Think about what’s most important to you — the colors, the size, the subject matter, etc. — and save up for when you come across the piece that speaks to you and hits all t 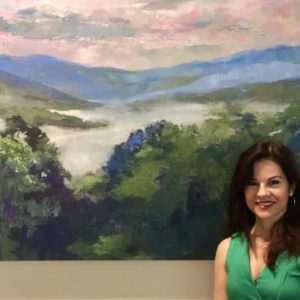 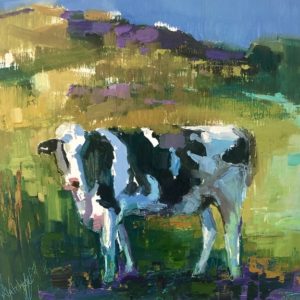 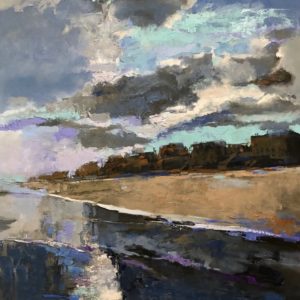 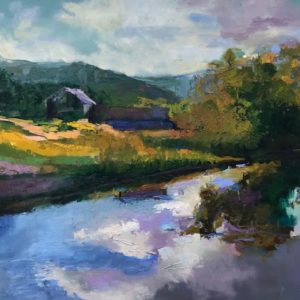 What did you want to be when you grew up?

As a child, I loved art and the theater and dreamed about moving to New York City to pursue both of them. I loved music too, but I could not carry a tune. I attended the New York Studio School in the Village and took art classes there while taking private acting lessons. The height of my “acting” career was an off-Broadway role as a teenage runaway in David Rabe’s “Hurly Burly” and as an extra in a Whitney Houston music video. I soon grew tired of the cut throat nature of acting and turned back to my first love, art! New York City was a great place for art! Soho galleries and my favorite museum of all time, The Metropolitan Museum of Art.

What is the most difficult challenge about approaching a blank canvas?

When I see a blank canvas, I try to imagine a 3D version of what I want to create in color and in form and to commit to the intention.

What comes first, the composition or the palette?

The composition comes first because it involves movement across space and how to develop it in an active manner to engage the eye.  I may want the eye to rest or to dance around the canvas.

What is your favorite item in your home?

As an oil painter, Ann explores a wide range of subject matter, from marshes and beaches to boats and figures, believing that it is not the subject matter that defines her art but the expression of it, the play of light, active compositions, textures and bold color choices.  Ann combines an Impressionistic sensibility with touches of abstraction.  She develops the image through several stages, starting with a gestural, wet on wet approach, adding layers through techniques such as scumbling and glazing.  Composition and mood inform her art with the goal of creating a visual experience for the viewer.  Ann is curious about the endless possibilities of art that can be created from experiencing such things as the soft light at the end of the day or the way the light reflects off of a piece of silver.
Ann received a Bachelor of Fine Arts degree from the University of South Carolina. While there, she earned an internship at the Corcoran Museum of Art in Washington, DC and also studied at the New York Studio School. Most recently, she has studied with nationally recognized artist, Andrew Braitman in Charlotte, NC.

Over the last seven years, Ann’s paintings have been included in numerous juried shows including American Impressionist Society, American Women Artists, and Art in Embassies, a division of the U.S. State Department. Ann’s paintings were included in an exhibit on southern women artists at the residence of the U.S. Ambassador to Bahrain and Ann will be taking more paintings there in April 2017 and teaching workshops. Her paintings have been featured in the media including a commercial for the Levine Cancer Center and season three of the Showtime series, “Homeland.”  Duke University Medical Pavilion commissioned Ann to paint a scene for its cancer center. Ann’s art hangs in numerous private collections around the country.

Ann’s professional memberships include the American Impressionist Society and American Women Artists.
Ann believes that her art is a journey and that anything can be made magical by the addition of brush strokes, color and light! 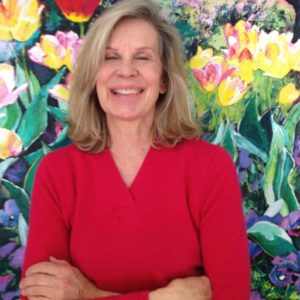 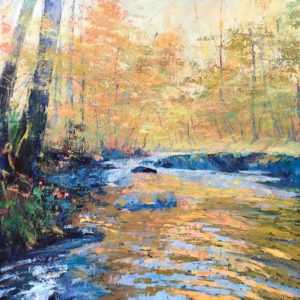 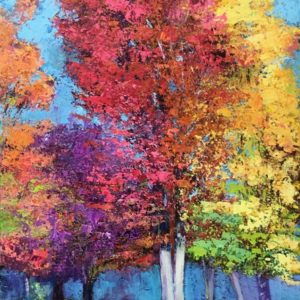 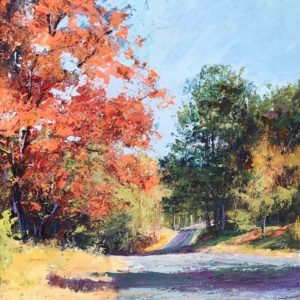 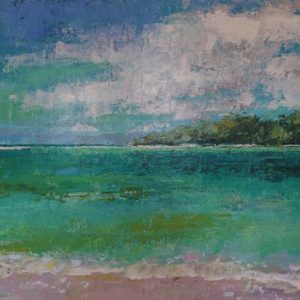 What did you want to be when you grew up?

I always wanted to be an artist… I thrive on creating and making things and searching for beauty and trying to capture it and  make it last…  getting messy is a delight and I adore color and paint !

If you could paint like any of the Masters, who would it be and why?

Claude Monet.  I love the way he saw and captured broken light..his passion for flowers, nature and his big canvases.

In what museum would you be most proud to have your work included in their collection?

Well, if I’m dreaming I’ll choose Musee de l’Orangerie, in Paris… because thats the home of Monet’s big Water Lily pieces that I admire and its also in Paris.. whats not to love !

What artists inspire your work?

What other types of art do you think mix best with your own?

I often hang my trees and flowers next to a large abstract and let the colors reverberate between them.

The large scale canvases of local painter Ginny Chenet reflect the artist’s love of nature and fascination with light and flowers. Chenet works primarily in oils and acrylics, choosing to render floral subjects in dramatic, richly colored detail and to create haunting, impressionistic landscapes which seem to resonate with the changing light of day.

Chenet draws her subject matter from personal experience.  The mountains, lakes, and wooded lanes in her landscapes reflect Ginny’s Michigan roots and new-found Carolina home. The vivid irises for which she is well known grow out of childhood memories of her father’s well-tended garden.

Ginny Chenet received her BFA from Michigan State University in 1971.  She is a member of the Creative Council of Michigan and a winner of the Traub Art Award.  She has exhibited widely in juried art shows and galleries and has earned numerous awards.  Her work is included in private and corporate collections. She has exhibited at the Horace Williams House in Chapel Hill and created the cover art and illustrations for the newly published Chapel Hill Service League Cookbook, Nothin’ Finer. Featured at three shows at Magnolia Grill and at Duke Hospital.